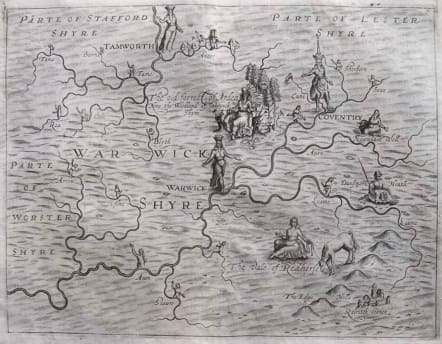 Michael Drayton(1563-1631) was an esteemed poet of the late Elizabethan age and close friend of William Shakespeare. In 1612 he published his opus magnum entitled 'Poly-Olbion' which contained songs praising the beauty of England & Wales. To accompany these songs, 'allegorical' maps were included; rivers were represented by nymphs, hills by shepherds, forests by huntresses and cities by crowned female figures. Whilst limited cartographically, the maps epitomise both the artistic sentiment and pervading sense of national pride of that time. The maps were engraved by William Hole, one of the earliest known English engravers.