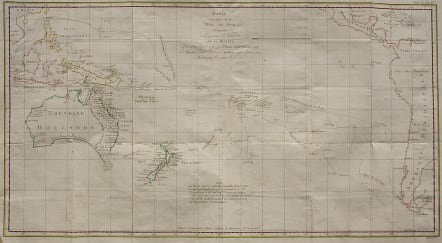 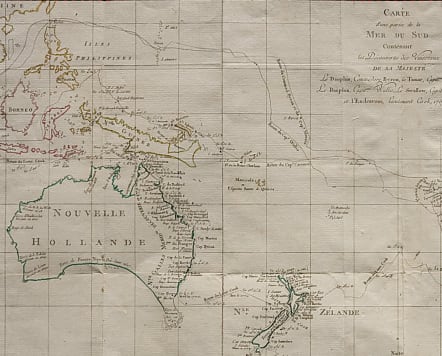 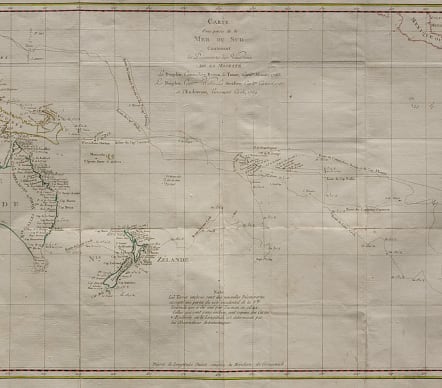 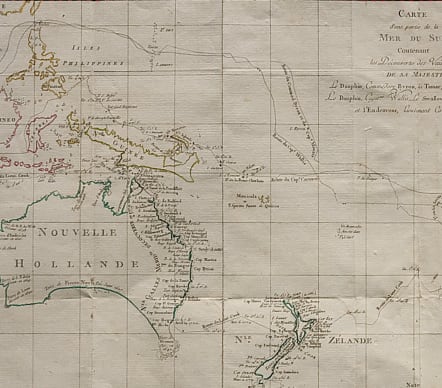 Excellent detailed chart of the Southern Pacific with interesting detailed information on place names in Australia and New Zealand.

Captain James Cook is believed to be the greatest navigator of his day, and contributed to the mapping of Australia and the Pacific more than any other explorer. During his first voyage of 1768-71 on the Endeavour, he charted New Zealand and the eastern coast of Australia. This map follows the voyages of Cook and other explorers of the South Pacific Ocean between 1765 - 1769. The routes of Byron, Mouats, Wallis, Carteret, and Cook are depicted, with indications of the dates of their travels and their discoveries. A notation on the map indicates that the shaded coastlines are the new discoveries of these explorers. The southeastern tip of Australia is still connected to Tasmania, and the inland area is blank as it was still unexplored at the time.

The first voyage under Captain James Cook's command was primarily of a scientific nature. The expedition on the Endeavour initially sailed to Tahiti to observe the transit of the planet Venus in order to calculate the earth's distance from the sun. Cook landed on the South Pacific island in April of 1769 and in June of that year the astronomical observations were successfully completed. In addition to these labors, very good relations with the Tahitians were maintained and the naturalists Joseph Banks and Daniel C. Solander conducted extensive ethnological and botanical research.

Another purpose of the voyage was to explore the South Seas to determine if an inhabitable continent existed in the mid-latitudes of the Southern Hemisphere. Upon leaving Tahiti, Cook named and charted the Society Islands and then continued southwest to New Zealand. His circumnavigation and exploration of that country also resulted in a detailed survey. Cook proceeded to Australia, where he charted the eastern coast for 2,000 miles, naming the area New South Wales. As a result of these surveys, both Australia and New Zealand were annexed by Great Britain. In addition to these explorations, the Endeavour returned to England without a single death from scurvy among its men, an historic feat at the time. The combination of these accomplishments brought Cook prominence, promotion, and the opportunity to lead further expeditions. (Ref Tooley; M&B Clancy) 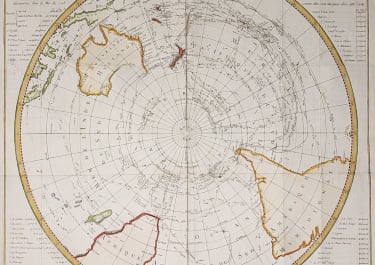 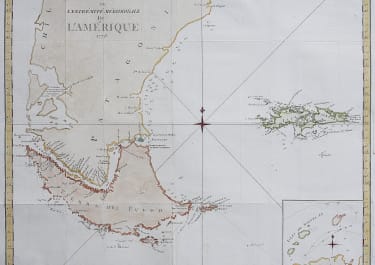 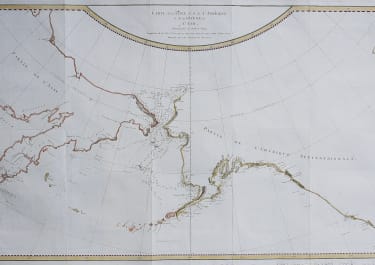