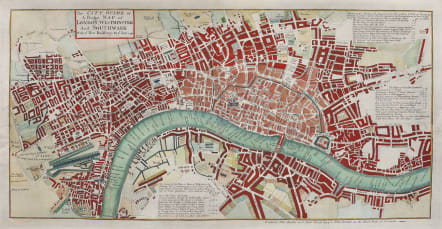 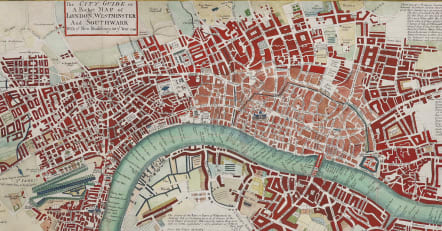 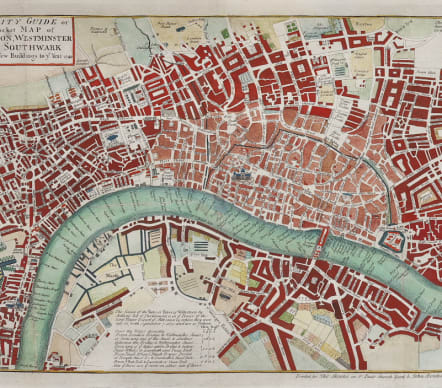 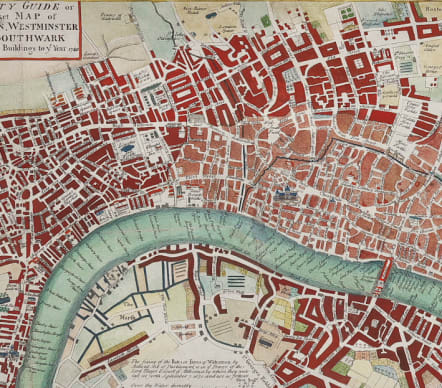 THE CITY GUIDE OR POCKET MAP OF LONDON, WESTMINSTER AND SOUTHWARK..

Full Title: The city guide or a pocket map of London, Westminster and Southwark: with ye new buildings to ye year 1744

A table of fares for Hackney Coaches and Thames ferries appears at top right and bottom centre of this map of London, published in 1740. The map also shows the new bridge at Westminster, erected from 1739 to relieve traffic on London Bridge and facilitate access to new districts west of the old City of London.

The zone surrounding St Paul’s Cathedral and extending west to Temple, north to Moorfields and east to the Tower of London is rendered with stippling to show that it is densely covered with buildings. This area was the old City of London.

Excellent professional restoration with ms for Hide of Hide Park.

Thomas Bowles, born around 1712, was map publisher and seller in London. The business was continued by John and Carrington Bowles and finally under the name Bowles and Carver until early 19th century. Thomas died in 1767.

Print publisher, younger son of Thomas Bowles I, and brother of Thomas Bowles II (q.v.). While Thomas II took on the family business, John set up his separate print shop c.1723 at Mercers' Hall, Cheapside, London. By 1733 was trading (also?) at the sign of the Black Horse, Cornhill. John's career can be followed through eight catalogues that he published between 1728 and 1768. The last is no less than 167 pages long.

In 1752 or 1753 his son Carington Bowles (q.v.) became a partner and for about ten years until 1764 they traded as John Bowles & Son. Carington then left to take on the business of Thomas Bowles II, his uncle, leaving John to continue the existing business, dropping the '& Son'. John Bowles died a rich man in 1779 and his remaining stock was bought by Robert Wilkinson.

A second son of John Bowles was another John, who became a barrister and loyalist pamphleteer. He was disgraced after a fraud case in 1809 (see Vic Gatrell, 'City of Laughter', 2006, p.454)

Title page of catalogue in Heal Collection (Heal,82.1) states "To Mr. John Bowles & Son, Print Sellers, London. A Catalogue of Maps, Prints, Copy-Books, &c. From off Copper-Plates, Printed for John Bowles and Son At the Black-Horse in Cornhill, London. Where Merchants, Gentlemen, City and Country Shop-keepers, and Chapmen, may be furnished with the newest and best Variety, at the lowest Prices." Heal,100.19 is identical to above but does not include "& Son". 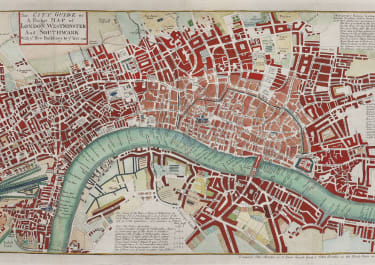