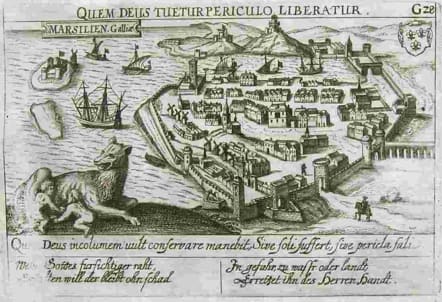 Daniel Meissner was born 1585 in Komotau, Bohemia and lived in Frankfurt Sachsenhausen after he finished his education. His most important work was "Thesaurus Philo-Politicus", a collection of cityviews beside the well known works of Merian, Braun & Hogenberg and Münster. First published 1623 by Eberhard Kieser (Frankfurt, 1583-1631) titled "Thesaurus Philo-Politicus. Das ist: Politisches Schatzkästlein guter Herren unnd bestendiger Freund" with total 52 views. Followed by the second edition between 1624 and 1631 with 416 views and finally the third edition 1638-43 with new title "Sciographia cosmica" by Paulus Fürst (Nuremberg, 1608-66) with around 830 views. The engravings of cities, villages, monasteries and castles showing the places before Thirty Years' War and have high source relevance. He died in 1625.